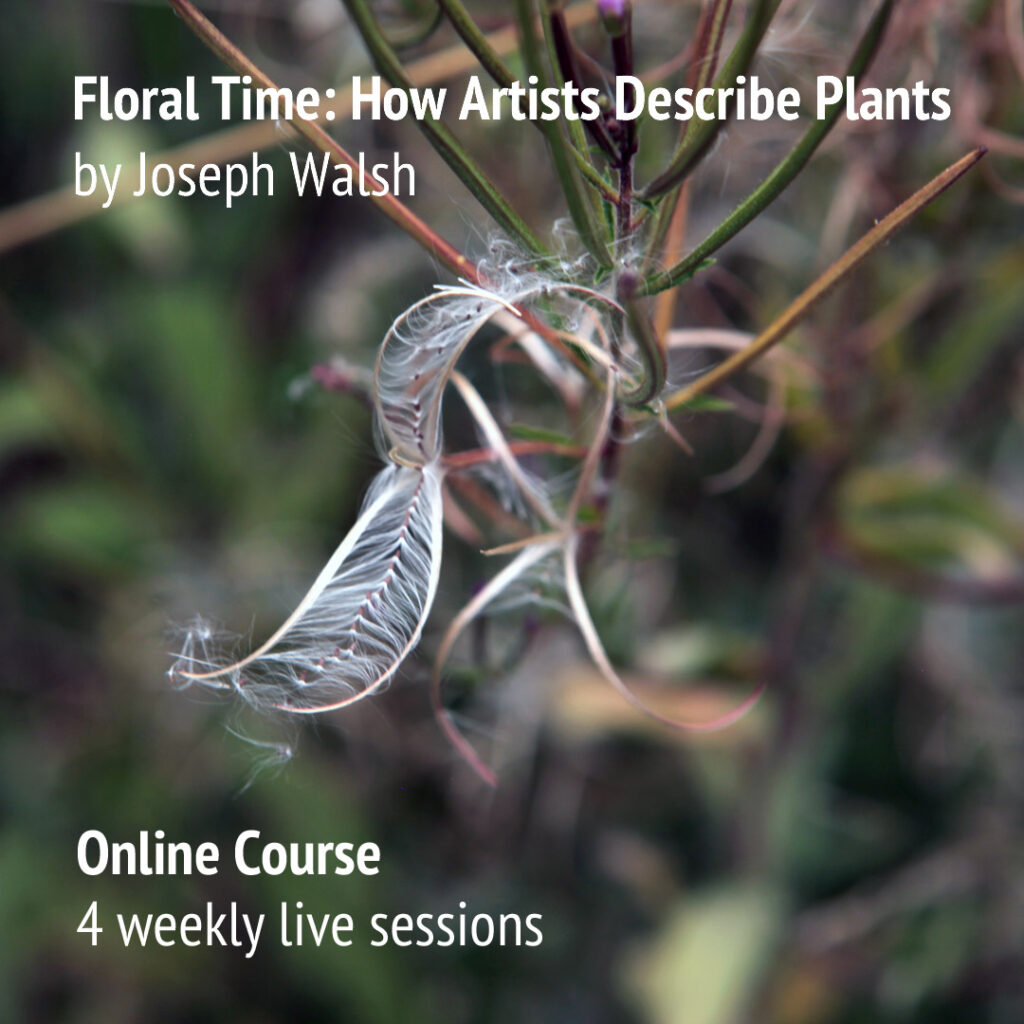 “Embracing an ecological consciousness will involve shifting away from human-centred concerns in order to admit other actors/consciousnesses, such as the environment, plants, soil, and the earth as a living system. Applying artistic methods to the relationship with nature can make thinkable otherwise ‘alien’ epistemologies. In the sessions of this course we will be undertaking activities and excercises that create ways of looking at nature. Alongside this we will engage with art, writing, and artefacts which describe understandings of human beings’ relationship(s) to nature. Topics that will be discussed will include: animist thinking, non-human time, notions of the self in relation to plants, and forms of storytelling that gives natural phenomena a cogent sense of ‘personhood’. An online forum will be active over the course where participants can engage and share work, receive feedback from the course instructor and consider an observation-led process.” (Text & photo by courtesy of Joseph Walsh)

Joseph Walsh is an artist based in London. His work is about plants and actualising the statement “we co-habit with nature”.  This has involved doing herb meditation workshops, observational drawing and painting in nature, and learning through his upkeep of a plot of land in a wildlife community garden.  He has also produced films, his most recent was about the long running cook’s collective The Bonnington Cafe in London, showing its alternative work practice and how its approach to cooking and collective organisation has been sympathetic to a diversity of people.  Most recently he contributed to Flatness.eu and did a Caribic Walking residency.  Select exhibitions include Human Machine Interface, Hilbert Raum, Berlin; Greenhouse Effect, Beaconsfield Gallery, London; Date With Thyme, ANDOR, London; Swamp Living, co-organised workshop at IMT Gallery, London; performance at The Showroom, London and 21st Century, a performative presentation at Chisenhale Gallery.  He studied Fine Art at Goldsmiths University, London, was a guest student at Staedelschule, Frankfurt and attended the LUX AAP programme.

Save the dates in your calendar

We record the live sessions so that they remain available for a logged in course participant until one week after the last session. Please check before booking a course the technical requirements as listed below.

You will get access to the course content and lessons in our learning management system once you are enrolled.

We will use the Zoom Meeting application for the live sessions. You need a stable internet connection. There are two ways to access the live meeting:1. Via the Zoom appBefore joining a Zoom meeting on a computer or mobile device, you can download the Zoom app here: https://zoom.us/downloador on: https://apps.apple.com/de/app/zoom-cloud-meetings/id546505307Otherwise, you will be prompted to download and install Zoom when you click our join the zoom meeting link.2. Via Google Chrome Browser on https://zoom.us/joinIf you are using Google Chrome to join a meeting, you will see a dialog box to launch the Zoom application.https://support.zoom.us/hc/en-us/articles/201362593-Launching-Zoom-from-a-web-browserHere you find more info: https://youtu.be/hIkCmbvAHQQ

We will provide the Zoom Meeting ID before each meeting. BAI will record the live sessions.

System requirements for the live sessions

For Windows, macOS, and Linux:
https://support.zoom.us/hc/en-us/articles/201362023-System-requirements-for-Windows-macOS-and-Linux

For iOS, iPadOS, and Android:
https://support.zoom.us/hc/en-us/articles/201179966-System-requirements-for-iOS-iPadOS-and-Android

In addition to the Online Program, the Berlin Art Institute offers an international Studio Program, a Residency Program, Portfolio Courses, a Spring Academy, an Arts Incubator, a Friends Program, and the presentation and exhibition display 404 | BAI.

If you have any questions, please contact us at ecourses@berlinartinstitute.com

Add to wishlist
Take this Course